ICMPD in the framework of EU-funded ENIGMMA 2 project

hosted the Migration Talks webinar
How ‘Passportization’ Practices can affect Freedom of Movement in Breakaway Regions?

Celebrating the International Law Day on 5 July in Georgia, established to honour the professional legacy of the merited scientist and public figure, Ambassador Extraordinary and Plenipotentiary, the founder of research and teaching of International Law in Georgia Academician Levan Alexidze, international webinar was dedicated to one of the important issues of Professor Levan Alexidze’s academic and practical engagement.

The international webinar featured Prof. Anne Peters – Director at the Max Planck Institute for Comparative Public Law and International Law and a Professor at the Universities of Heidelberg, Free University of Berlin, Basel and Michigan as well as Prof. Dr. Ketevan Khutsishvili – Director of International Criminal Law Centre established on the initiative of late Levan Alexidze at TSU, as well as a founder of the Georgian-English Levan Alexidze Journal of International Law, in a discussion moderated by Dr. Saba Pipia – Associate Professor at the Georgian-American University, currently a Visiting Fulbright Scholar at the Michigan State University.

The webinar with around 80 participants from numerous countries outlined the framework of legality of large-scale extraterritorial naturalization practices, also referred to as “passportization”. The focus was further made on lawfulness of so-called “passportization” practices carried out by the Russian Federation in breakaway regions of Georgia and Ukraine. The distinguished speakers scrutinized various aspects of this policy and practice of large-scale extraterritorial naturalization, such as forcible and coercive nature of “passportization”, its linkage with international humanitarian law; it was also debated whether such steps may qualify as de facto annexation of territories and possible legal consequences of recognition of citizenship acquired through collective “passportization” was also considered. In the Question & Answer session, the panelists and participants also discussed possible measures by the occupying power to escape from the obligations under the International Humanitarian Law.

Throughout 2021, the Levan Alexidze Foundation and ICMPD have collaborated in a series of events promoting human rights and democratic standards, dedicated to the 95th jubilee of the founder of the International Law school in Georgia Levan Alexidze, late Full Member of the Georgian National Academy of Sciences. 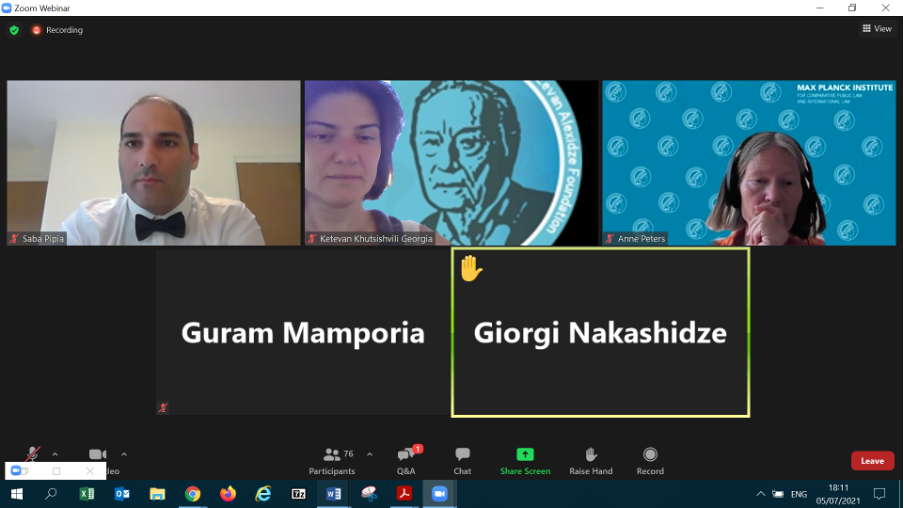