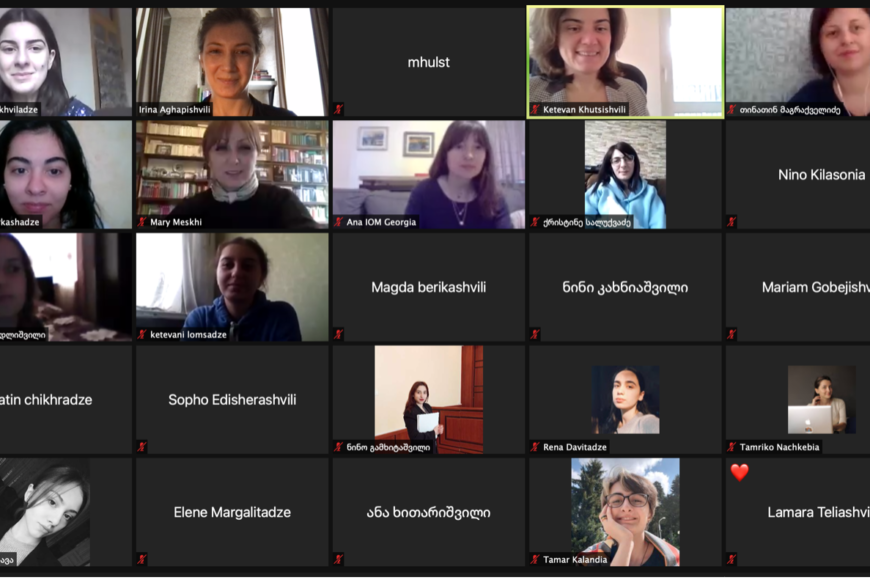 On 13 March 2021 as a part of celebration of the Women’s History Month, a cycle of meetings “International Legal Regulation of Gender Equality: Contemporary Challenges” was launched. The cycle of meetings is organized by the Levan Alexidze Foundation, with the support of the USAID and EWMI PROLoG activity, in cooperation with the Training Centre of Justice of Georgia, Georgian-American University and the TSU Gender and Law Chair.

The first meeting was devoted to the international legal mechanisms of gender equality and state monitoring within the United Nations and the Council of Europe.

Academician Levan Alexidze’s former student, Professor Ketevan Khutsishvili, in her introductory speech addressed the participants from the higher education institutions and high schools across Georgia, analysing the role of states, main subjects of International Law, in observing international legal standards against discrimination. Specific attention was devoted to the state responsibility for protection of human rights and ensuring gender equality, as well as eradicating violence against women and domestic violence. The mechanisms discussed included the ones under the United Nations and the Council of Europe such as the Commission on the Status of Women, Special Rapporteur on Violence against Women, Committee on the Elimination of Discrimination against Women, Group of Experts on Action against Violence against Women and Domestic Violence, etc.

Executive Director of the Georgian Young Lawyers’ Association Nino Chikhladze discussed the peculiarities of shadow reporting and the role of non-governmental organisations in fighting violence against women and domestic violence since the restoration of independent statehood of Georgia. Along with discussing practical aspects of drafting periodic reports under the Convention on Elimination of Discrimination against Women and the Universal Periodic Review, the particular emphasis was also made on the work of non-governmental organisations in the process of implementation of the Council of Europe mechanisms.

The cycle of meetings is a part of the celebration events organized from early 2021 by the Levan Alexidze Foundation dedicated to the 95th jubilee of the merited scientist, professor and public figure Academician Levan Alexidze.